This week most of the cool kidz are at VMworld in San Francisco learning and playing with the latest technologies from VMware and Partners. I was not so fortunate to be there, but I had a chance to help a customer to virtualise their legacy applications using the latest release of ThinApp (4.6).

Yes, the new ThinApp 4.6 is also a hot topic at VMworld. If you didn’t have a chance to use ThinApp I recommend you to download the evaluation product and start packaging your applications.

This customer in specific has already been using VMware ThinApp for at least 4 months as part of the desktop strategy to move all workstation to Windows 7. They started using ThinApp after a major failure trying to utilise other application virtualisation products, not to mention names. Being a government department they have a crap load of legacy applications. Some of the applications are 15 years old, some based on Java 1.3 and others that will only work on Internet Explorer 6.

Using previous releases of ThinApp they have been able to virtualise those legacy applications whilst allowing different releases of Java to co-exist on the same Windows XP. If you recall, up to Java 1.3 only a single instance of Java was allowed per Windows. ThinApp also allowed them possible to package IE6 and run on Windows 7.

Before ThinApp 4.6 to package a legacy IE6 + Java1.3 the process would be somewhat like:

With ThinApp 4.6 the process is somewhat similar but the options are the key differentiation:

Cutting the chase, during the post-scan you will have the option to harvest IE6 from Windows XP and run it in a fully visualised sandbox, or create an entry point for the default Internet Explorer installed in your Windows and run it inside the sandbox. This second option gives you the possibility to create a fully portable application package that will run in any release of Internet Explorer, or even being able to use a single default IE with multiple legacy java versions – in my case 1.3. 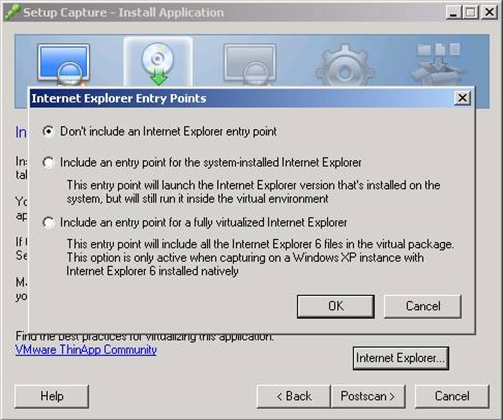 From the release notes, other features I consider industry killer are:

This customer is deploying ThinApp packages into their base SOE but their desktop strategy is already defined and ThinApp is a key component to allow them to migrate to Windows 7. In the future they will stream the packages from a centralised network share. Once they are ready for VDI adoption the last thing they will have to worry is about application compatibility.

It’s not uncommon to see 20% of the applications causing 80% of the issues for IT administrators. Take a look at your application catalogue and identify legacy applications with heavy dependencies, and give it a go with ThinApp.